Tarot Card Of The Day 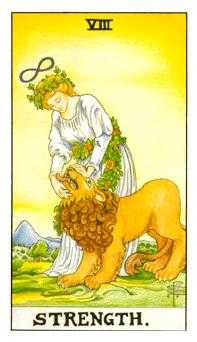 The Strength Tarot card represents nature, which, however wild in its primal form, is tamed by our subtler, finer self -- our feminine side, our inner self. The will and passion of our instinctive nature does not need to be broken, but refined and brought to consciousness, so that all levels of creation may come into harmony.

The feminine soul-force contains a persuasive power that can nurture and induce cooperation from others, stilling disruptive energies by harmonizing differences in the spirit of collective good will. 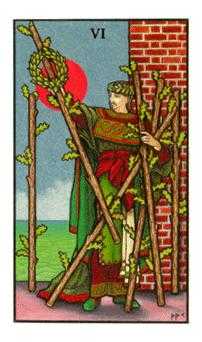 This suit, most often called "Wands" and sometimes called "Rods" or "Staves," represents initiative, ambition, drive and desire. This is the suit of enterprise and risk-taking.

The Six of this suit points to the respect and acknowledgment due to you for your efforts to solve the problems of your community. The image is usually of a victory parade, after the celebrated leader helped troops win a pivotal battle.

It took the whole tribe to win the victory, of course, but it was the leader's heroism and clarity under pressure that inspired them to overcome. The team is thrilled that the leader led them to victory. This card points to a time to let everyone relax and celebrate -- if you are the leader, let them applaud you. They are seeing their better selves reflected in you -- a victory indeed! 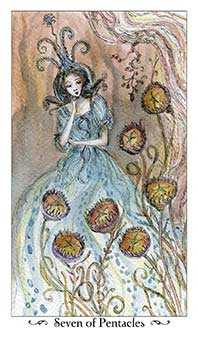 The Seven of this suit is typically a paean to the humble laborer who is willing to show up every day and sweat in the sun for next season's bounty. The traditional concept is cultivation, with an attitude that slow and steady wins the race, with faith in nature's assistance. The protagonist of this card doesn't make excuses, isn't whimsical or moody, but is dedicated and sees the job through. Of course, it's no good to count your chickens before they hatch, but there's no question that the person who is vigilant over a project is more likely to get the desired result.

Someone who works with nature, cooperating with her ways, will waste less energy and time than the person who works against her. As a side meaning, we sometimes see this normally humble farmer in a moment of frenzy, betting the crop on a roll of the dice. This represents a moment of dementia, addiction or desperation which hopefully will not last long enough for the farmer to lose everything!

Get Your Daily Horoscope, Daily Love Horoscope and Daily Tarot Directly In Your Inbox