horoscope, in astrology, a chart of the heavens, showing the relative positions of the Sun, the Moon, the planets, and the ascendant and midheaven signs of the zodiac at a specific moment in time. A horoscope is used to provide information about the present and to predict events to come.


An individual horoscope usually plots the moment of birth and is used by astrologers to analyze character, as well as-in conjunction with other astrological data-to predict the future. This is in accordance with the belief that each celestial body has its own mythological character, modified according to its geometric relationship with the other celestial bodies at a given moment. 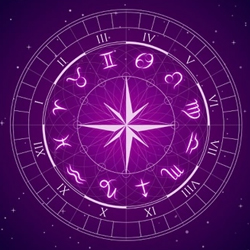 Everything in the universe being interrelated, these bodies exert an influence, particularly on the newborn. In casting a horoscope, the heavens are commonly represented by a circle divided into 12 intersections, called houses. Each of these houses is assigned several departments of human life, such as wealth or marriage. The planet that falls within a particular house is said to influence matters pertaining to that house.

Get Your Daily Horoscope, Daily Love Horoscope and Daily Tarot Directly In Your Inbox